By admin on Thursday, July 29, 2021
Advertisements

It is the first direct observation of light from behind a black hole in a phenomenon predicted by Einstein’s theory of general relativity but never confirmed until now.

For the first time, astronomers have observed light coming from the other side of a black hole bent due to the warping of space-time around the object. These observations coincide with the predictions Albert Einstein made in 1963 about how gravity bends light around black holes, as described in his theory of general relativity.

The researchers focused on observing the mysterious ‘corona’ of the black hole, which is the source of the bright X-ray light and is believed to be due to gas continually falling into the black hole, overheating, and forming a disk—revolving around it. During the observations, the science team also saw a series of smaller flashes. They were the same X-ray flashes but reflected from the back of the disk, the researchers determined. 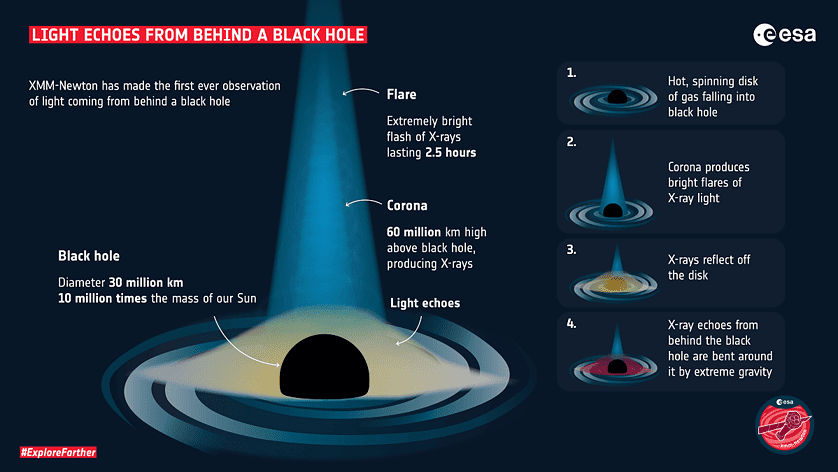 “The light that goes into that black hole doesn’t come out, so we shouldn’t be able to see anything behind the black hole . The reason we can see that is because that black hole is warping space, bending the light, and twisting magnetic fields around itself, “explained Wilkins, the lead author of the new study published in the journal  Nature.

The observed black hole is located at the center of the spiral galaxy I Zwicky 1, 800 million light-years from Earth, and is 10 million times more massive than our Sun.

“50 years ago, when astrophysicists started speculating about how the magnetic field might behave near a black hole, they had no idea that we might one day have the techniques to observe this directly and see Einstein’s general theory of relativity in action, “said Roger Blandford, co-author of the article, quoted by the Phys.org portal .